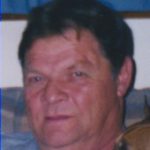 Born in Carbondale, he was the son of the late Arthur and Mildred Barnicott Wormuth. Jack was a retired self employed truck driver. He was a founding member of the Childs Hunting Club. He was an avid NASCAR fan and enjoyed his Terrier dogs.

He was preceded in death by three sons, Douglas, Daniel and Michael Wormuth and a sister Edna Hoyle.

Funeral services will be private at the convenience of the family. Oliver Shifler & Scotchlas Funeral Home, Inc., Carbondale is assisting the family.