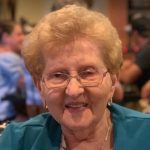 Marilyn E. Lewis, 90, of South Scranton died Monday at Mountain View Nursing Center, Scranton. She was the widow of James J. Lewis, who died in 1996. Jim was the love of her life.

Born in Scranton, she was the daughter of the late William C. and Margaret M. Jones Ordnung. She was a graduate of Scranton Central High School and the Hahnemann School of Nursing, Scranton.  Marilyn was employed as a registered nurse and was later a homemaker and mother to her family. Her faith and her family were her whole life.

Marilyn was a member of the First United Church of Christ, Scranton and had been an active member of the Women’s Circle.  She was strong in her Christian faith.

She was preceded in death by a sister, Shirley Veno.

The funeral will be Friday at 11:00 AM in the Eagen-Hughes Funeral Home, 2908 Birney Avenue, Scranton with services by Pastor Robert S. Cooper, First United Church of Christ.  Interment will follow in Fairview Memorial Park, Elmhurst.  Friends may call on Friday from 10:00 until the time of service.

In lieu of flowers, memorial contributions may be made to: First United Church of Christ, P.O. Box 37, Taylor, PA 18517