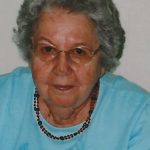 Melba Collum, 97, of Clifford Township died Thursday, July 8 at the Green Ridge Nursing Center, Scranton.  She was the widow of Mahlon  G. Collum, who died in 2005. The couple had been married for 57 years at the time of his death.

Born July 20, 1923, in Lackawanna County she was the daughter of the late Hobart and Nellie Pallman Clark. Melba was a graduate of Benton Vocational High School, Fleetville and the Penn State School of Cosmetology, Scranton in 1942.

Melba enjoyed Country & Western and Bluegrass music, reading Helen Steiner poetry, baking, cooking and her flowers and attending to her garden. She was a member and former officer of Laurel Chapter # 67, Waymart Eastern Star. A member of Dormer Deputies of Northeastern Pennsylvania, a member of the Phoenix Club, Union Dale and served as an auditor in Clifford Township.

She was preceded in death by a brother, Warren Clark.