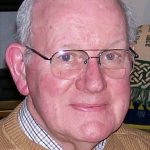 Richard “Dick” Kelly,90, of Archbald died Friday  at Scranton Regional Hospital after a sudden illness.  He is survived by his wife of 64 years, Florence Merrick Kelly.

Born in Archbald, he was the son of the late Edwin and Teresa Pidgeon Kelly.  Dick was a true gentleman.  He made a friend wherever he went.  He was a member of Christ the King Parish, its Holy Name Society and a past 4th degree grand knight for its Knights of Columbus.  He was also a member of the Eynon VFW and the Archbald American Legion.  Dick served his country during the Korean Conflict.  He was very active with Christ the King Church especially its parish picnic.  Dick was a graduated of St. Patrick’s High School, Olyphant class of 1948 and The University of Scranton.  He retired in 1995 as an accountant at RCA, later Thompson Consumer Electronics.  Dick loved spending time with his family and “the club”.  He loved going on trips to Disney, Hawaii, Ireland, Switzerland and Ocean City, MD.   What made Dick the happiest was to be called Poppa by his 2 grandsons who he referred to as “my boys”.

He is survived by his daughter Mary Houser and husband Douglas, Chantilly, VA; 2 grandsons Jonathan and Matthew.  He is also survived by several nieces and nephews.  He was preceded in death by his sister Mary, and a brother Edwin.

The funeral mass will be Tuesday at 11:00 AM  in  St. Thomas Aquinas Church, Christ the King Parish, 429 Church St., Archbald to be celebrated by the Rev. Brian Clarke.  Friends may call at the church from 10 AM until 11 AM.   Internment will be at the parish cemetery.