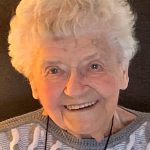 On Dec. 31st, Stella (Zrowka) Obzud, 94, left her earthly life to return home to her maker and the special place reserved for her in heaven. She was the last survivor of the Paraska & Hnatko Zrowka clan of 13 children which included brothers Michael, Walter, Stephen, Paul, Myron, Peter, Donald, Joseph, and John; and sisters Mary Zrowka and Olga Wowk. Her last surviving sister, Ann (Honchie) Connolly sadly passed away on Dec. 19th.

She left behind her beloved children, “The Five Js,” Janet Slick, Joan Ciotti, John (Cindy), June Bifano (Bob), and Jeanne Tolerico (Jerry), to join her husband, John “Fritz” Obzud, who was called home on April 2, 1965. She was preceded in death by her son-in-law, Fred Ciotti, and her first grandchild, Jerry Slick.

Stella “the Star,” as she often called herself, graduated from Fell High School in 1944. She was a devoted member of St. Peter & Paul’s church and its choir. She was a member of the VFW Ladies Auxiliary and a former Girl Scout leader. She had a short political career, completing her husband’s term as Fell Twp supervisor after his death in 1965. She quickly decided that politics was not “her thing” and returned to a life of caring for others and baking delicious desserts.

The greatest joy and purpose in her life was being a mother who dedicated her life to her children. She instilled in her children and grandchildren a feeling of self-worth and confidence. Her home was a perpetual open house and no one ever left there hungry. Sunday mornings after mass were always spent around Stella’s kitchen table with her extended family, drinking coffee and eating a variety of her baked goods.

Because she loved sparkles and glitter, we plan to wear something that she would love. If you wish to join in, please do.

Stella’s children would like to thank all of her wonderful caregivers, especially Kim and Nikki. We will also be forever grateful for the compassionate care and emotional support given to us and our mom by Hospice of the Sacred Heart

The funeral will be Tuesday from the Joseph W Scotchlas Funeral Home, Inc., 621 Main St., Simpson with Divine Liturgy at 10:30 AM in Ss. Peter & Paul Greek Catholic Church, 43 Rittenhouse St. Simpson by the Rev. Myron Myronyuk. Interment will be in Our Mother of Sorrows Cemetery, Greenfield Township.  Friends may call on Monday from 5 to 8 PM.  Those attending will be required to wear masks.