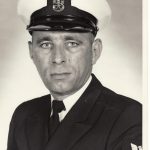 Thaddeus T. “Ted” Sarnoski, 85, of Whites Crossing died Sunday at home. He is survived by his wife of 61 years, Dolores Sisko Sarnoski.

Born in Whites Crossing, he was the son of the late John and Josephine Kozlowski Sarnoski. He attended Fell High School, Simpson and served for 20 years in the Navy, during the Korean & Viet Nam Wars retiring in 1966 as a Chief Petty Officer. Ted also served on the Fell Township Police Department and was employed at Farview State Hospital, retiring in 1991. He was active in the American Legion Post #221, Carbondale, Veterans of Foreign Wars Post # 4712, Simpson, the Association of Retired Military and the Fleet Reserve Association.

He was a member of St. Michael’s Church, St. Rose Parish, where he was a Eucharistic Minister at St. Michael’s Church for 30 years. Ted was a loving husband, father, grandfather and great grandfather. He could often be found tending to his large yard and garden where Sunday he became ill in his apple orchard.

The funeral will be Thursday from the Joseph W Scotchlas Funeral Home, Inc, 621 Main St, Simpson with Mass of Christian Burial at 11:00 AM in St. Michael’s Church, 46 Midland St, Simpson. Interment with military honors will be in Holy Trinity Cemetery, Simpson.

Friends may call Wednesday from 3 to 7 pm.

For directions or condolences visit the funeral home website.